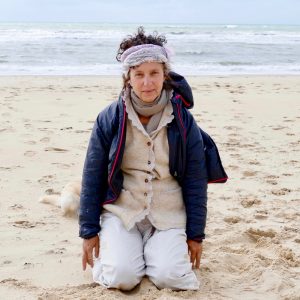 Rani Kaluza was born in 1959. She studied Painting Art in Cologne. Today she works as writer, dressmaker and spiritual guide.

Raised as a Christian, she found her way to Buddhism and the Shambhala group around Chögyam Trungpa Rinpoche rather at an early age. Intensive meditation practice followed, including a two-year stay at a retreat center in the USA. Later, the meditative life led her to Advaita, to Samarpan, Gangaji and to Ramana Maharshi in India – only to bring her back finally, to her roots – the wisdom of the mystics. The path of doing nothing is both fruit and quintessence of this long journey.

“Only the simple, unintentional Being Here, in connection with giving up of the search itself, convinced me after all, that the fundamental nature of this universe is love and consciousness, and that this nature breathes through everything in the most awesome way.”

Rani offers Doing Nothing Retreats and she also accompanies and advises people personally on their spiritual path.

or also on Jetzt TV